The past 3-4 years have seen exponential growth in published reports of evidence that toxic forms of Aβ likely play an important role in the progressive loss of neurons. Striking similarities link the underlying neurodegenerative pathology in ocular neurodegenerative diseases such as glaucoma and AMD with the central nervous systems disorder Alzheimer’s disease (AD). These suggest that elimination of toxic Aβ oligomers could be a promising therapeutic approach to slowing or halting retinal neurodegeneration. Combining recent knowledge of Aβ pathophysiology, a novel small molecule approach has emerged, aimed at eliminating all toxic species of Aβ from the retina while leaving normal Aβ intact, which could potentially slow neurodegeneration and progression in AMD and glaucoma.

The mechanism by which GAL-101 addresses Aβ is markedly different than competitor approaches, specifically preventing aggregation of misfolded Aβ monomers into soluble oligomers of Aβ known to damage neuronal cells in general and RGCs in particular (see Fig.1 below). Most previous approaches failed because they targeted all forms of Aβ using less selective antibodies or secretase inhibitors. These approaches also interfered with innocuous non-misfolded forms of Aβ that are best left alone as they are required for proper synaptic function. In addition, breaking up innocuous deposited “plaques” in Alzheimer’s disease triggers the release of toxic oligomers sequestered by endogenous internal “defense” mechanisms, so that these drugs led to toxicity and additional neuronal damage. Later Aβ-directed antibody approaches selectively targeting some, but not all forms, of toxic Aβ oligomers due to epitope specificity and were therefore not able to neutralize Aβ oligomer toxicity completely. However, recent press releases indicate that one such oligomers-specific antibody, Aducanumab, might have some therapeutic efficacy.

GAL-101 avoids these pitfalls, by targeting only misfolded monomers to prevent the formation of all species of toxic Aβ oligomers, while not interfering with normal Aβ monomers in their important neural function. Scavenging these toxins at source, GAL-101 aims to prevent damage to retinal neurons and facilitate natural repair mechanisms to halt progression and potentially help restore lost visual function.

Galimedix’ developmental drug candidates GAL-101 and GAL-201 belong to a novel pharmacological class of Aβ aggregation inhibitors. They have high specificity and selectivity to misfolded Aβ monomers and prevent their aggregation to the highly toxic Aβ oligomers as illustrated below. 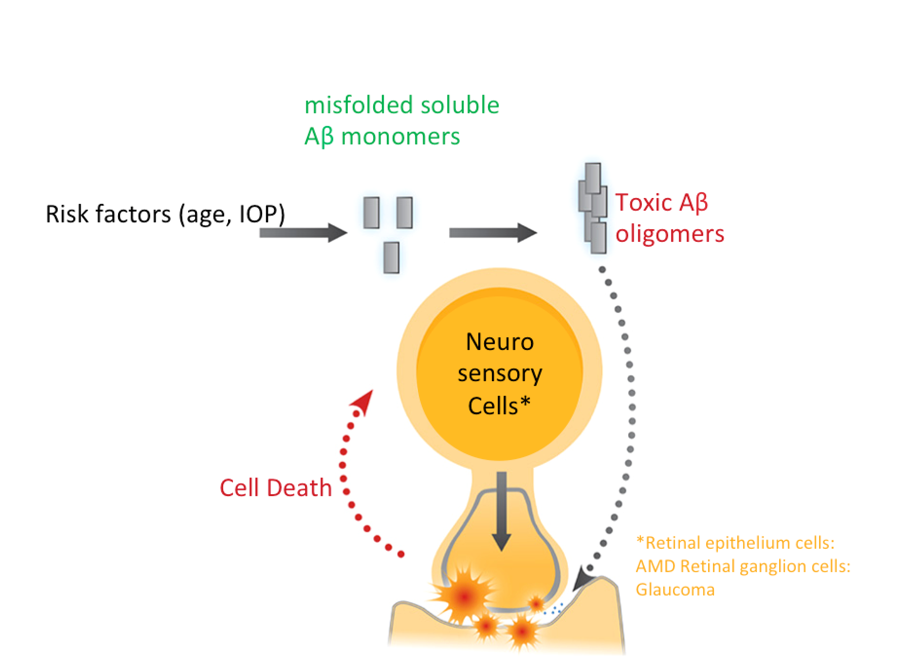 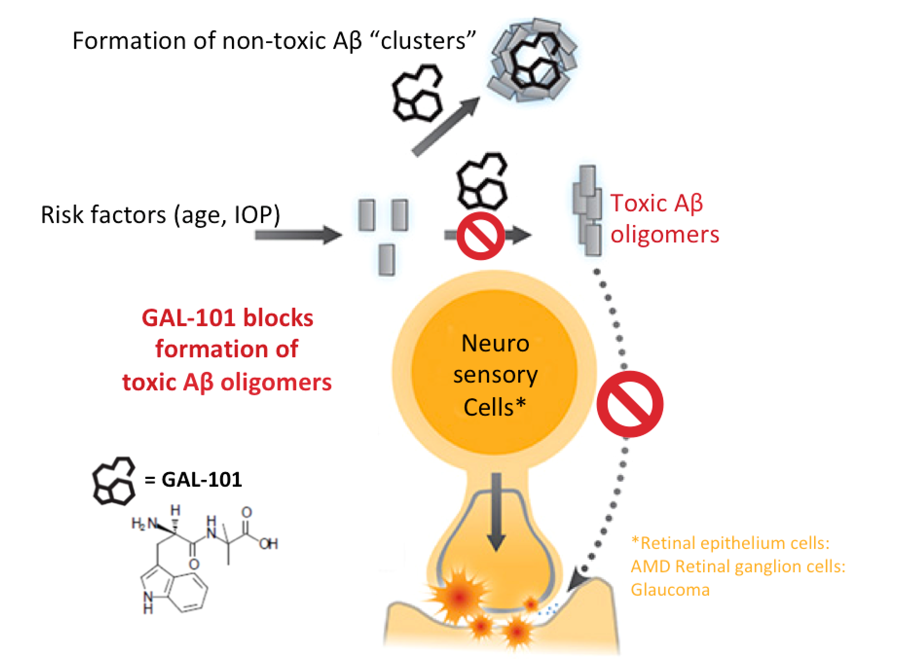 GAL-101 (and likewise GAL-201) are designed to prevent the formation of all forms of Aβ oligomers by binding with high affinity to the misfolded Aβ monomers. These then rapidly conglomerate into amorphous, non-β-sheet formations, which we call “clusters” (see Fig. 2 above). These clusters are innocuous and can likely be enzymatically removed from the tissue. Interestingly, once formed, the clusters have shown the capacity to collect additional misfolded Aβ peptides even in the absence of additional GAL-101 molecules, through a kind of self-propagation mechanism. This novel “trigger effect,” which is protected by Galimedix’ patent portfolio, results in a sustained action effect lasting far longer than the time a single administration of the drug remains at therapeutic levels in the retina. This potentially allows for a convenient sustained inter-treatment interval application regimen for patients. Thus GAL-101 eye drops may provide sustained prevention of formation of toxic Aβ oligomers, clearing the system of these pathological factors. This is the mechanism behind the strong neuroprotective effect observed in animal models.