Toxic Aß oligomers attach to membrane receptors and form channels in the membranes of different types of neuronal and neurosensory cells, such as retinal ganglion cells (RGCs), retinal pigment epithelium (RPE) cells and hippocampal neurons, causing them to lose their electrical membrane potential and eventually killing them. This is common to various neurodegenerative diseases such as glaucoma, AMD or Alzheimer`s disease.

Results from a patch-clamp experiment in RGCs from mice cultivated for 5-7 days demonstrate the potential for being measured as indicator for the toxic effect of increasing concentrations of Aβ oligomers. A concentration of only 44 nmol/l Aβ kills 50% of the cells in culture (Fig. 3). 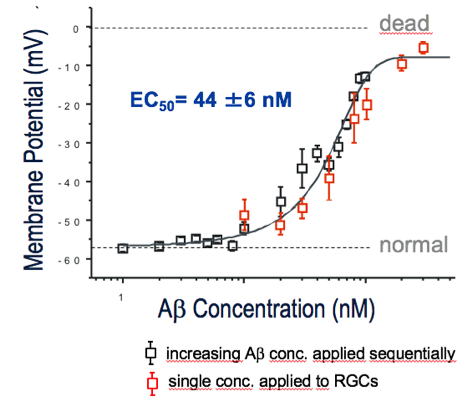