In the Morrison rats, even a single administration of GAL-101 prior to IOP elevation was seen to provide over 90% neuroprotection after 6 weeks. In the CFH -/- mouse model of AMD, chronic intermittent topical GAL-101 (2%, 3 µL, 3 times a day for 3 days per month for 3 months) also decreased retinal amyloid and complement (C3)

This extended effect was further investigated in vitro, where GAL-101 was shown to detoxify Aβ in hippocampal slices in less than 20 minutes, reversing Aβ-induced deficits in neuronal plasticity. Detoxification persisted even following serial dilution, resulting in minimal final concentrations of GAL-101 (0.1 nM). Further studies using atomic force microscopy showed this might be mediated by a rapid formation of amorphous aggregates of Aβ, which are formed as a result of the presence of the compound. Together, these data suggest that initial peak levels trigger a cascade of self-propagating detoxifying Aβ aggregates which continue to detoxify even after GAL-101 is no longer near effective concentrations.

These results suggest that transient GAL-101 peak above threshold concentration in a toxic Aβ environment causes a “trigger effect” leading to sustained detoxification. Thus, a single administration delivering even brief retinal peak levels of GAL-101 might have sustained detoxifying effects in glaucoma patients due to the trigger effect. 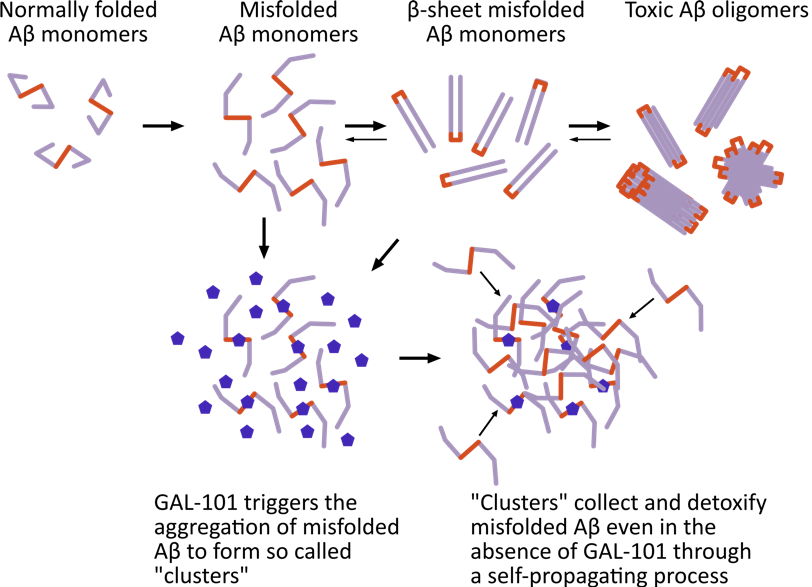